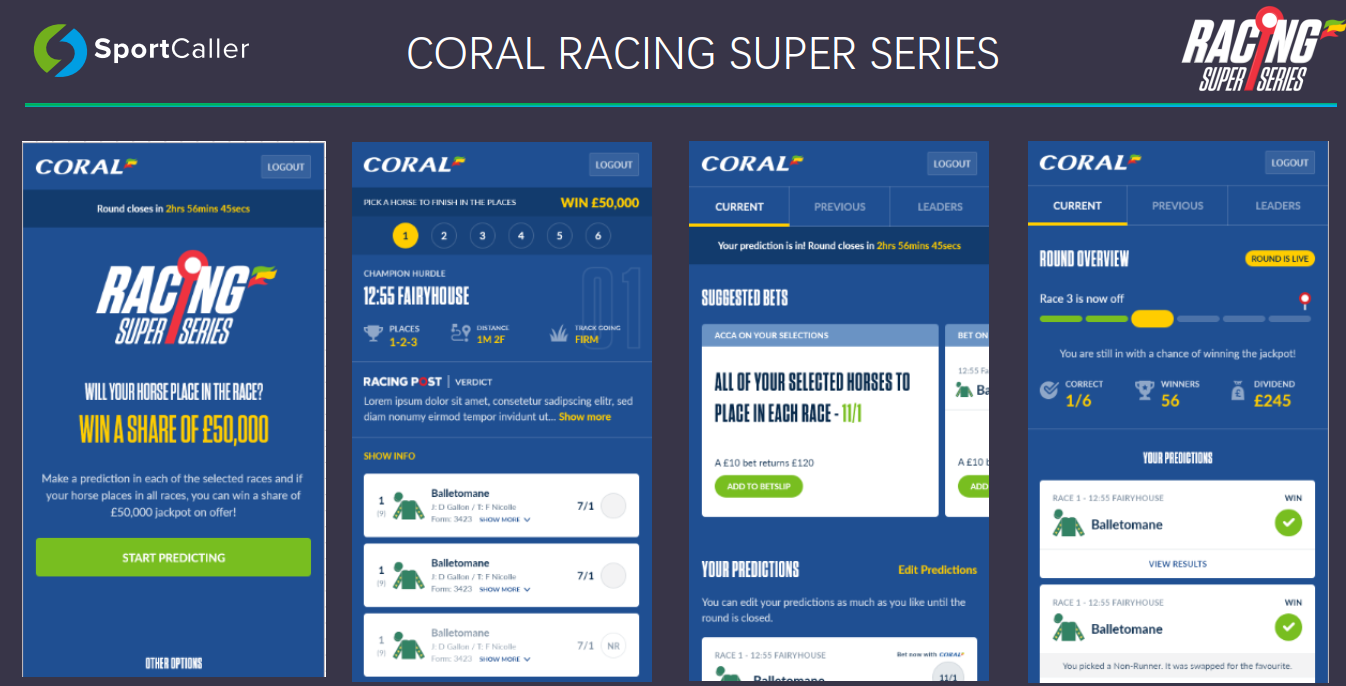 SportCaller has extended its successful Free-to-Play (FTP) partnership with Coral with the launch of the new Racing Super Series game.

The game, which delivers a fresh twist on the classic Placepot, gives punters the chance to share in a minimum £25,000 jackpot by picking a horse to finish in the places across the first six races on a chosen card at both UK and Irish race meetings. The game debuted with great success at last month’s flagship King George meeting at Ascot.

Players will also gain enhanced place terms on the big races, which will improve the chances of a winning trigger for all entrants and increase the probability of a positive user-outcome.

Cillian Barry, MD at SportCaller, said: “Horse racing is one of the few sports which has been able to maintain a quality fixture list during the global pandemic. And from an FTP perspective, racing games have historically generated the highest rates of engagement and retention.

“So, when Coral charged us with breathing new life into the Placepot format through the Racing Super Series, we couldn’t wait to get started on a game which embraces both our teams’ underlying passions.

“The FTP framework of jackpot predictors is an established winner for improving acquisition and retention. However, you need “winnable” jackpots on marquee events to really engage players, so a guaranteed share of 25k for getting six horses to place, not win, on King George day seemed like an attractive premise.

“The engagement levels have been fantastic, while the conversion rates to funded accounts speak to the trust and brand recognition which these games can foster.”

This is not SportCaller’s first foray into racing this year, having recently extended its partnership with the UK Tote Group with the return of the Tote Ten to Follow.

Racing Super series delivers a suite of new features which is expected to drive reliable engagement throughout the course of the competition, which runs until 17 October.

Paddy Pepper, Head of Real Time CRM at Coral, added: “The biggest compliment you can pay SportCaller’s FTP games is that no-one ever questions why you’re offering them. Coral’s Racing Super Series on the King George meeting was an instant hit with our players, harnessing the enduring appeal of a Placepot bet with immersive features which sustain engagement throughout the racecard.

“It was important to remain true to the small-stakes-big-win spirit of the Placepot, but retool it so that this renowned raceday ritual can better connect with more modern audiences, particularly on mobile.

“The early results have been encouraging and we’re confident we’ve bottled its timeless appeal for the next generation of racing fans without compromising our existing loyal base. That’s a tightrope that SportCaller treads better than anyone. After all, while you should never tamper with a classic, you must give it a lick of paint once in a while!

“We see Racing Super Series becoming a familiar weekly winner for all our racing fans, who can watch the action live on coral.co.uk or via our app.”