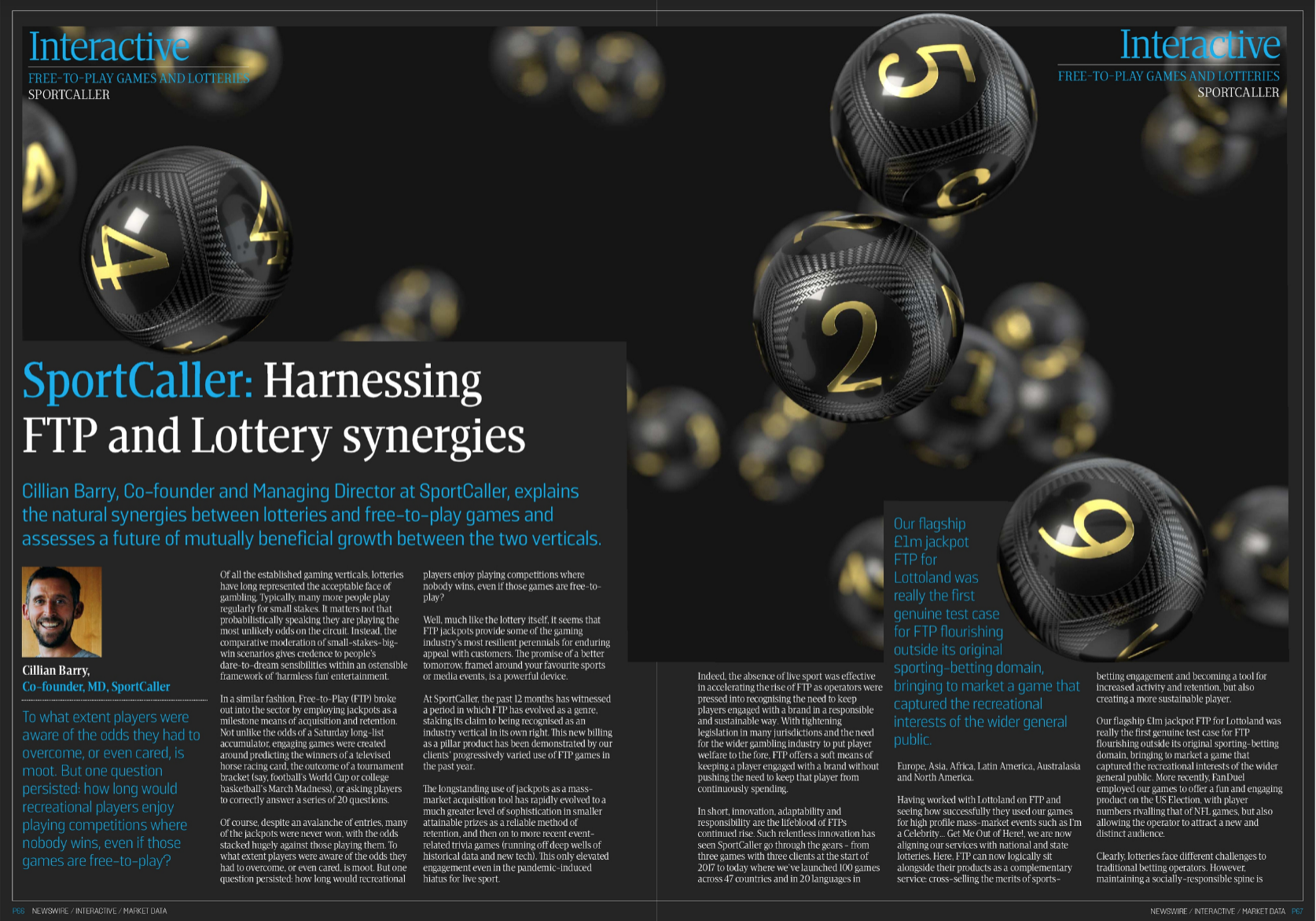 Of all the established gaming verticals, lotteries have long represented the acceptable face of gambling. Typically, many more people play regularly for small stakes. It matters not that, probabilistically-speaking, they are playing at the most unlikely odds on the circuit. Instead, first and foremost, the comparative moderation of small-stakes-big-win scenarios gives play to people’s dare-to-dream sensibilities within an ostensible framework of “harmless fun” entertainment.

In a similar fashion Free-to-Play (FTP) broke out into the sector by employing jackpots as a milestone means of acquisition and retention. Not unlike the odds of a Saturday long-list accumulator, engaging games were created around predicting the winners of a televised horse racing card, the outcome of a tournament bracket (say, football’s World Cup or college basketball’s March Madness) or asking players to correctly answer a series of 20 questions.

"Our flagship £1m jackpot FTP for Lottoland was really the first genuine test case for FTP flourishing outside its original sporting-betting domain, bringing to market a game that captured the recreational interests of the wider general public"

Of course, despite an avalanche of entries, many of the jackpots were never won, with the odds stacked hugely against those playing them. To what extent players were aware or the odds they had to overcome, or even cared, is moot. But one question persisted: how long would recreational players enjoy playing competitions where nobody wins, even if those games are free-to-play?

Well, much like the lottery itself, it seems that FTP jackpots provide some of the gaming industry’s most resilient perennials for enduring appeal with customers. The promise of a better tomorrow, framed around your favourite sports or media events, is a powerful device.

At SportCaller, the past 12 months has witnessed a period in which FTP has evolved as a genre, staking its claim to being recognised as an industry vertical in its own right. This new billing as a pillar product has been demonstrated by our clients’ progressively varied use of FTP games in the past year where the longstanding use of jackpots as a mass-market acquisition tool has rapidly evolved to a much greater level of sophistication in smaller attainable prizes as a reliable method of retention, and then on to more recent event-related trivia games (running off deep wells of historical data and new tech) which elevated engagement even in the pandemic-induced hiatus for live sport.

Indeed, this absence of live sport was effective in accelerating the rise of FTP, operators were pressed into recognizing the need to keep players engaged with a brand in a responsible and sustainable way. With tightening legislation in many jurisdictions and the need for the wider gambling industry to put player welfare to the fore, FTP offers a soft means of keeping a player engaged with a brand without pushing the need to keep that player from continuously spending.

In short, innovation, adaptability and responsibility are the lifeblood of FTP’s continued rise. Such relentless innovation has seen SportCaller go through the gears from three games with three clients at the start of 2017 to today where we’ve launched 100 games across 47 countries and in 20 languages in Europe, Asia, Africa, Latin America, Australasia and North America.

Having worked with Lottoland on FTP, and seeing how they successfully they used our games for such high profile mass-market events as I’m a Celebrity… Get Me Out of Here!”, we are now aligning our services with national and state lotteries. Here, FTP can now logically sit alongside their products as a complementary service: cross-selling the merits of sports-betting engagement and becoming a tool for increased activity and retention, but also creating a more sustainable player. Our flagship £1m jackpot FTP for Lottoland was really the first genuine test case for FTP flourishing outside its original sporting-betting domain, bringing to market a game that captured the recreational interests of the wider general public. More recently, FanDuel employed our games to offer a fun and engaging product on the US Election, with player numbers rivalling that of NFL games but also allowing the market-leading operator to attract a new and distinct audience.

Clearly, lotteries face different challenges to traditional betting operators. However, maintaining a socially-responsible spine is ultimately a convergent reality for everyone in the gaming sector if they want to succeed by both protecting and growing their base in regulated markets. Lotteries and free-to-play have just enjoyed a substantial head-start. Furthermore, free-to-play’s recent expansion into a lighter-touch retention would naturally promote better engagement for sports-loving lottery fans in a conscientious fashion.

Recent history has seen a trend of big lotteries opening up their own sportsbooks – and with good reason. After all, why blunt the competitive edge of having built up a loyal and extensive database only for significant swathes of that base to shop elsewhere when it comes to taking an interest on their favourite sports? FTP can prove the missing bridge between those pursuits, offering lotteries vital sportsbook excitement and educational tools with which to both attract new customers cheaply and retain existing players who might otherwise have their head turned.

FTP’s game-type creativity will also help numbers-games like lottery, scratchcards and bingo naturally converge with sports in order that sportsbook players migrate to lottery products (and vice versa) with less friction. At SportCaller, we have already built successful games around shirt numbers in football and NFL, total points markets in basketball, or round-by-round golf scores, each of which possess the wide spread of potential numbers that organically overlap with the outcomes of lottery-related draws. In another related nod to lotteries, we have also found that around one third of entries on games which offer a “lucky-dip” mechanism use that as a means of making selections. It’s just part of our wider remit to create intersecting FTP products which build database, enhance brand awareness, bolster trust and accelerate market penetration.

Long story short, free-to-play and lotteries have all the tenets for mutually-beneficial support and growth. Especially as lotteries belatedly complete their transition to digitization and optimization for mobile (particularly pivotal to recruiting and serving the next generation of players) – domains in which all SportCaller games excel. As the pandemic has proved, it’s never been more important to be forward-thinking in our collective cross-selling techniques at a time when many traditional practices have been rendered obsolete or ethically antiquated.

Of course, harnessing the natural synergies between these compelling verticals is now the key to unlocking a new wave of successful partnerships.

Thanks to  G3 Interactive for their kind permission to reproduce this article.